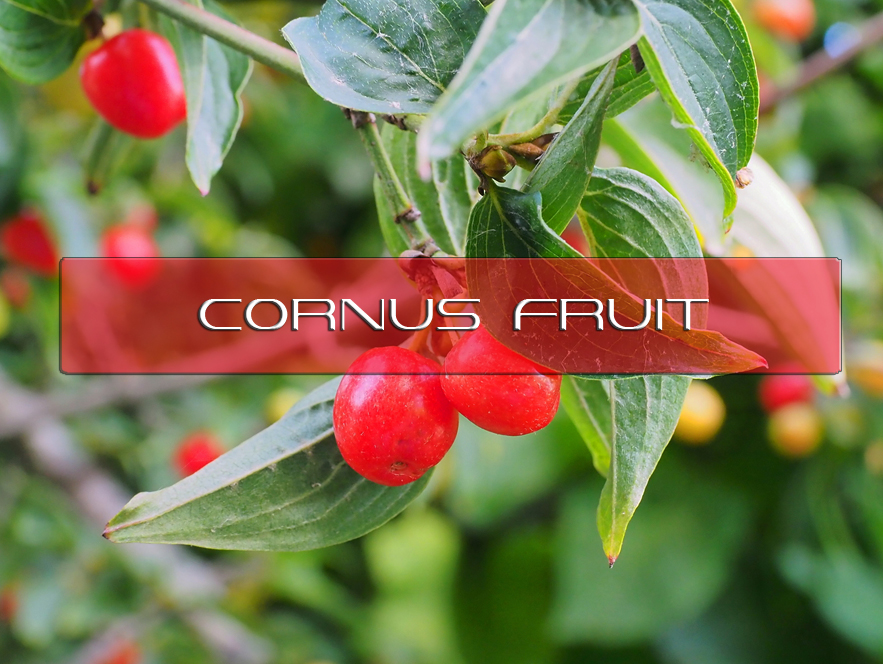 Cornus Fruit also known as Plum Flower Fruit grows from the Asiatic Dogwood which is found in many tropical areas of the world and harnesses a wide variety of health benefits. 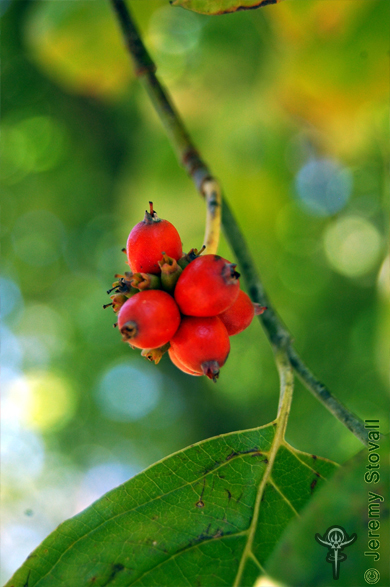 Among the Chinese lineage it is known as Shanzhuyu and has been utilized by many chinese herbalists for tonics and an astringent for formulas used to nourish the kidneys. The Cornus Tree, or the Japanese Cornelian Cherry have been noted as a well known decorative plant. These plants produce a large amount of sour fruits in late autumn, it is only collected when the fruits are red. The fruit is then baked over a slow fire or sometimes treated with boiling water and the kernals are then removed for the fruit to be sun dried.

The word "Cornus" is referrign to a group of around 30-60 different species of the woody plants. They are commonly known as "dogwood" While few of these species are considered evergreens, and some are just shrubs or trees. You can find the variety of Cornus plants through the South Eastern United States, Europe, China, and North America.

The nutritional benefits and properties of the different cornus plants varies among the different species for it. An example would be the Jamaican Dogwood contains many healing properties and has been consumed by many people to treat various ailments. On the other hand the American Dogwood is a poisonous plan and should never be consumed.

These dried fruits have been said to replenish the liver and kidney and retrain the loss of essence. The sour taste can be attributed to the common fruit acids which do include malic acid, tartaric acid, and gallic acid.

In Korea, cornus fruit is a popular remedy for impotence. As an example, a product made from the combined extracts of cornus (49%), lycium (46%), and rubus (5%) fruits is widely distributed and promoted for this purpose (shown right, with cornus fruits featured on the label). The fruit and this formulation are also said to be useful for promoting beautiful complexion, so it is a product recommended for both men and women. In China, cornus wine and cornus liquor have been produced. The active components oleanolic acid and ursolic acid are now available in nearly pure form (e.g, 90% or more), though the source material is not cornus but ligustrum, a fruit that has a higher concentration of these active components. 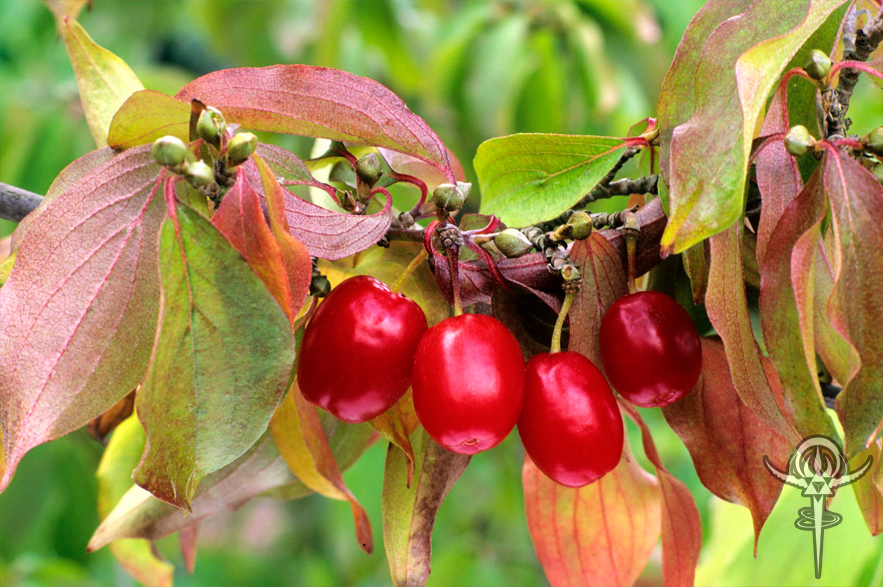 High in Antioxidants - Cornus mas fruit extract effect may be due to including some antioxidant components, which caused membrane stabilizing and normalization of fluctuated biochemical profiles induced by CCl4 exposure. Our results validated the traditional use of Cornus mas in the treatment of liver disorders. (Article)

Allergies and Asthma - In the study to investigate the anti-asthmatic effects of CF and their underlying mechanism, by examining the influence of CF on the development of pulmonary eosinophilic inflammation and airway hyperresponsiveness in a mouse model of allergic asthma, showed that the therapeutic effects of CF in asthma are mediated by reduced production of Th2 cytokines (IL-5), eotaxin, and OVA-specific IgE and reduced eosinophil infiltration. (Article)

Diabetes and Insulin - In the study of isolated 12 compounds from Corni fructus including three flavonoids, two iridoid glycosides, three phenolic compounds, and two triterpenoids, together with cornuside (11) and 2-butoxybutanedioic acid (12). Chemical structures were identified by H, (13)C NMR, DEPT, COSY, HSQC, and HMBC spectral analyses, indicated that the glucose uptake efficiency, messenger (m)RNA expression of phosphoenolpyruvate carboxykinase (PEPCK), and prevention of cytokine-mediated cytotoxicity in the presence of test agents were evaluated. While CH and CB significantly increased glucose uptake from muscle, compounds 3 and 8, each at 50 μM, significantly suppressed PEPCK mRNA expression. Finally, compound 5, at 50 and 100 μM, effectively attenuated β-cell death. In conclusion, those compounds could contribute to the antihyperglycemic and β-cell-protective actions of Corni fructus against diabetes mellitus. (Article)

AMPK Activator with Potent Anti Obesity Effects — Obesity is a metabolic disorder characterized by chronic inflammation and dyslipidemia and is a strong predictor for the development of hypertension, diabetes mellitus, and cardiovascular disease. This study examined the antiobesity effect of an ethanol extract of Corni Fructus containing formulation (CDAP), which is a combination of four natural components: Corni Fructus, Dioscoreae Rhizoma, Aurantii Fructus Immaturus, and Platycodonis Radix. The cellular lipid content in 3T3-L1 adipocytes was assessed by Oil Red O staining. Expressions of peroxisome proliferator-activated receptor-γ (PPAR-γ), CCAAT/enhancer-binding protein-α (C/EBP-α), and lipin-1 were determined by real-time RT-PCR. Western blot was used to determine the protein levels of PPAR-γ, C/EBP-α, and AMP-activated protein kinase-α (AMPK-α). The CDAP extract suppressed the differentiation of 3T3-L1 adipocytes by downregulating cellular induction of PPAR-γ, C/EBP-α, and lipin-1. The CDAP extract also significantly upregulated phosphorylation of AMPK-α. An in vivo study showed that CDAP induced weight loss in mice with high-fat-diet-induced obesity. These results indicate that CDAP has a potent anti-obesity effect due to the inhibition of adipocyte differentiation and adipogenesis. (Article) 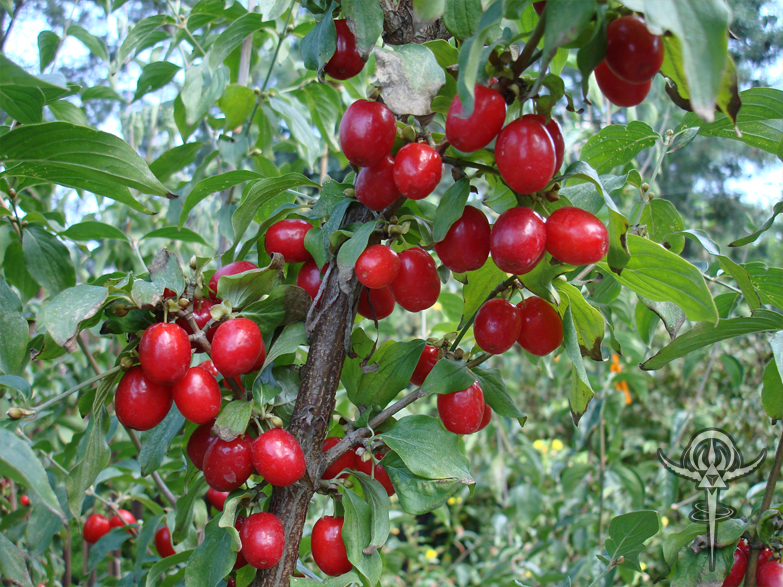