“Helicobacter pylori, previously known as Campylobacter pylori, is a gram-negative, helically-shaped, microaerophilic bacterium usually found in the stomach.[6] Its helical shape (from which the genus name, helicobacter, derives) is thought to have evolved in order to penetrate the mucoid lining of the stomach and thereby establish infection.[7][8] The bacterium was first identified in 1982 by Australian doctors Barry Marshall and Robin Warren, who found that it was present in a person with chronic gastritis and gastric ulcers, conditions not previously believed to have a microbial cause.[9][10][11] H. pylori has also been linked to the development of duodenal ulcers, polyps, i. e. benign growths, in the small intestine, large intestine, and rectum, and malignancies of the stomach’s secretory glands (termed stomach adenocarcinoma),[12] of the mucosa-associated lymphoid tissue in the stomach, esophagus, colon, rectum, or tissues around the eye (termed extranodal marginal zone B-cell lymphoma of the cited organ),[13][14][15] and of lymphoid tissue in the stomach (termed diffuse large B-cell lymphoma).[16]

Many investigators have proposed causal associations between H. pylori and a wide range of other diseases (e.g. idiopathic thrombocytopenic purpura, iron deficiency anemia, atherosclerosis, Alzheimer’s disease,[17] multiple sclerosis, coronary artery disease, periodontitis,[18] Parkinson’s disease, Guillain–Barré syndrome, rosacea, psoriasis, chronic urticaria, spot baldness, various autoimmune skin diseases, Henoch–Schönlein purpura, low blood levels of vitamin B12, autoimmune neutropenia, the antiphospholipid syndrome, plasma cell dyscrasias, central serous chorioretinitis, open angle glaucoma, blepharitis, diabetes mellitus, the metabolic syndrome, various types of allergies, non-alcoholic fatty liver disease, non-alcoholic steatohepatitis, hepatic fibrosis, and liver cancer[19]). The bacterial infection has also been proposed to have protective effects for its hosts against infections by other pathogens, asthma, obesity,[17] celiac disease, inflammatory bowel disease,[18] rhinitis, atopic dermatitis,[20] gastroesophageal reflux disease,[21] and esophageal cancer.[21] However, these deleterious and protective effects have frequently been based on correlative rather than direct relationship studies[18] and have often been contradicted by other studies that show either the opposite or no effect on the cited disease.[19] Consequently, many of these relationships are currently regarded as questionable and in need of more definitive studes.[17] They are not considered further here.

Some studies suggest that H. pylori plays an important role in the natural stomach ecology, e.g. by influencing the type of bacteria that colonize the gastrointestinal tract.[22][19] Other studies suggest that non-pathogenic strains of H. pylori may be beneficial, e.g., by normalizing stomach acid secretion,[23] and may play a role in regulating appetite, since the bacterium’s presence in the stomach results in a persistent but reversible reduction in the level of ghrelin, an hormone that increases appetite.[23]

In general, over 50% of the world’s population has H. pylori in their upper gastrointestinal tracts[5] with this infection (or colonization) being more common in developing countries.[4] In recent decades, however the prevalence of H. pylori colonization of the gastrointestinal tract has declined in many countries. This is attributed to improved socioeconomic conditions: in the United States of America, for example, the prevalence of H. pylori, as detected by endoscopy conducted on a referral population, fell from 65.8 to 6.8% over a recent 10 year period while over the same time period in some developing countries H. pylori colonization remained very common with prevalence levels as high as 80%.[24] In all events, H. pylori infection is usually asymptomatic, being associated with overt disease (commonly gastritis or peptic ulcers rather than the relatively very rarely occurring cancers) in less than 20% of cases.[25].” – WIKI

Helicobacter pylori (H. pylori) is a Gram negative bacterium that colonizes the stomach of almost half human population. It has evolved to escape immune surveillance, establishes lifelong inflammation, predisposing to genomic instability and DNA damage, notably double strand breaks. The epithelial host cell responds by activation of DNA damage repair (DDR) machinery that seems to be compromised by the infection. It is therefore now accepted that genetic damage is a major mechanism operating in cases of H. pylori induced carcinogenesis. Here, we review the data on the molecular pathways involved in DNA damage and DDR activation during H. pylori infection.

H. pylori infection leads to an increased rate of diabetes

CONCLUSIONS We demonstrated for the first time that H. pylori infection leads to an increased rate of incident diabetes in a prospective cohort study. Our findings implicate a potential role for antibiotic and gastrointestinal treatment in preventing diabetes.

Rationale: Proton pump inhibitors (PPIs) are popular drugs for gastroesophageal reflux, which are now available for long-term use without medical supervision. Recent reports suggest that PPI use is associated with cardiovascular, renal, and neurological morbidity.

Objective: To study the long-term effect of PPIs on endothelial dysfunction and senescence and investigate the mechanism involved in PPI-induced vascular dysfunction.

Conclusions:Our data may provide a unifying mechanism for the association of PPI use with increased risk of cardiovascular, renal, and neurological morbidity and mortality.

A new paradigm for GERD pathogenesis. Not acid injury, but cytokine-mediated inflammation driven by HIF-2α: a potential role for targeting HIF-2α to prevent and treat reflux esophagitis.

Traditionally, reflux esophagitis was assumed to develop as a caustic, chemical injury inflicted by refluxed acid. Recently, however, studies in rats and humans suggest that reflux esophagitis develops as a cytokine-mediated inflammatory injury, with hypoxia inducible factor (HIF)-2α playing a major role. In response to the reflux of acid and bile, HIF-2α in esophageal epithelial cells becomes stabilized, thereby increasing production of pro-inflammatory cytokines that attract T lymphocytes and other inflammatory cells to damage the esophagus. Recent studies have identified small molecule inhibitors of HIF-2α that demonstrate exquisite isoform selectivity, and clinical trials for treatment of HIF-2α-driven kidney cancers are ongoing. It is conceivable that a HIF-2α-directed therapy might be a novel approach to prevention and treatment of reflux esophagitis.

Chronic Helicobacter pylori infection increases the risk of gastric cancer and induction of hypoxia-induced factor (HIF), which is frequently associated with the development and progression of several types of cancer. We recently showed that H. pylori activation of the PI3K-AKT-mTOR pathway in gastric cells increased HIF-1α expression. Here, we identified the H. pylori virulence factor responsible for HIF-1α induction. A mutant of the H. pylori 84-183 strain was identified with reduced ability to induce HIF-1α. Coomassie blue staining of extracts from these bacteria separated by sodium dodecyl sulfate polyacrylamide gel electrophoresis (SDS-PAGE) revealed poor expression of urease subunits that correlated with reduced urease activity. This finding was confirmed in the 26695 strain, where urease mutants were unable to induce HIF-1α expression. Of note, HIF-1α induction was also observed in the presence of the urease inhibitor acetohydroxamic acid at concentrations (of 20 mM) that abrogated urease activity in bacterial culture supernatants, suggesting that enzymatic activity of the urease is not required for HIF-1α induction. Finally, the pre-incubation of the human gastric adenocarcinoma cell line AGS with blocking antibodies against Toll-like receptor-2 (TLR2), but not TLR4, prevented HIF-1α induction. In summary, these results reveal a hitherto unexpected role for the urease protein in HIF-1α induction via TLR2 activation following H. pylori infection of gastric cells. 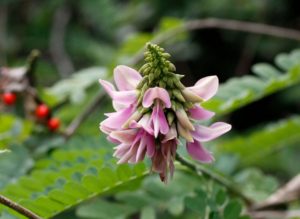 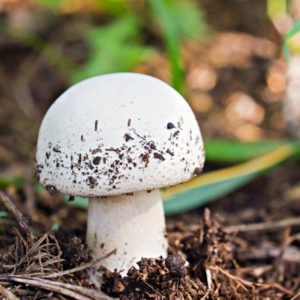 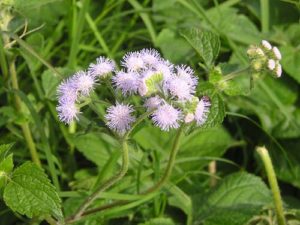 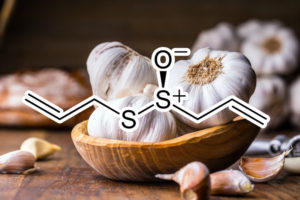 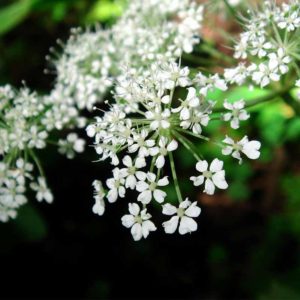 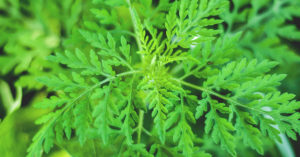 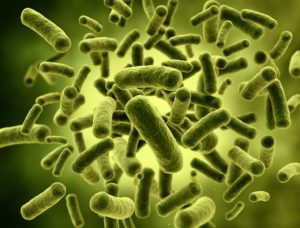 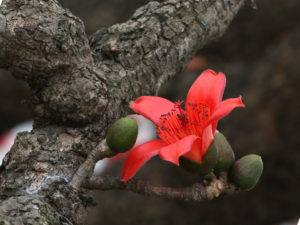 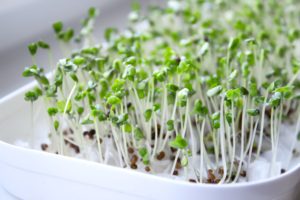 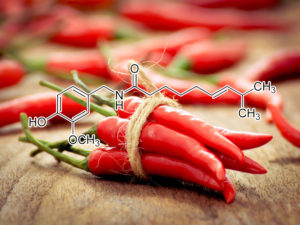 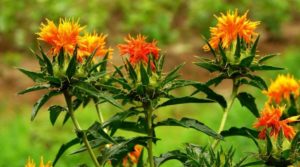 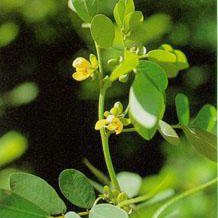 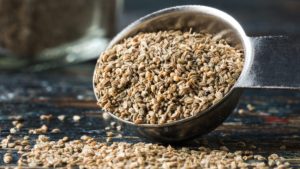 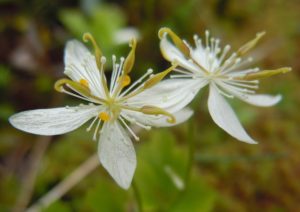 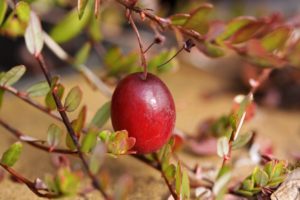 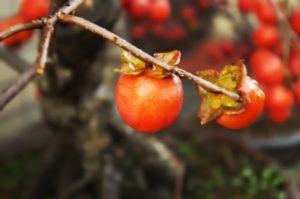 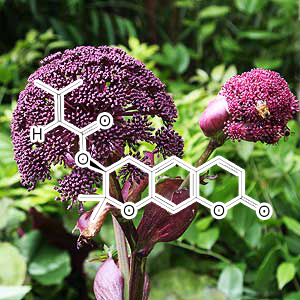 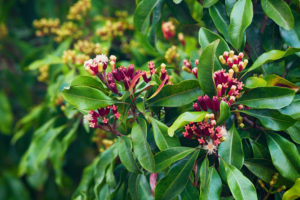 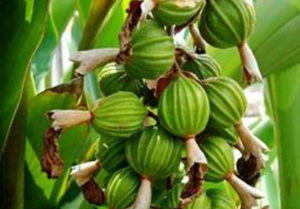 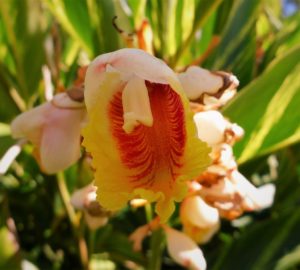 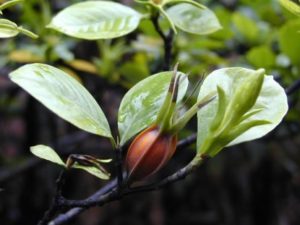 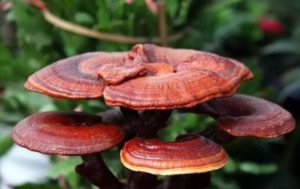 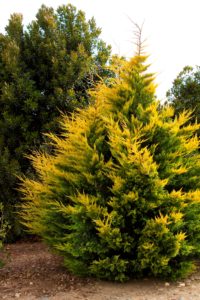